Over the last twenty-five years, Transnet Foundation has established community investment facilities in all provinces. This includes community centres, classrooms, creches and police stations. Most of the seventy-eight centres were built on government or tribal land and have been donated to government.

Over nine hundred unused Transnet containers were recycled and used in the construction of these facilities together with brick and mortar. CSI is aligned to the government's  National Development Plan and the Transnet mandate for sustainable socio economic development. Some of the projects are based in under-utilised Transnet buildings.

Five of these community centres are currently managed by Transnet CSI, with one at Idondotha in construction. These include four fully operational community centers, namely Ireagh in Mpumalanga, Khuma in Potchefstroom, Springs and Thokoza in Gauteng Province. In keeping with the shareholder focus on youth development and the NDP a community investment plan was developed and is being implemented. During national emergencies the centres always play a role in service delivery. These five facilities together have been rendering a basket of social and safety services and SMME incubation to the surrounding community members totalling about 309,000 clients since 2013. Agriculture is being developed as part of the centres. Tractors have been made available to community based gardens for crop production and to date since 2000 over 700 ha of land has been ploughed, planted and harvested with several in progress. Some of the centres have provided rail safety campaigns. Typically a centre provides social work services, police services, incubation of SMMes before handover to enterprise and supplier development, sport activities, 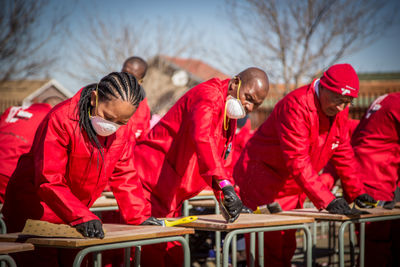 In total about 4,5 million people over 20 years, have benefitted at all projects increasing on a daily basis. Several of the centres work on a 24/7 basis 365 days a year in line with Transnet operations. Target groups include women, youth and active adult population groups. Direct and indirect jobs that have been created are in excess of 10 000 nationally. These centres bring services to the community and money to be spent on transport is then used for basic needs.

New sites and projects include clinics as part of centres at Idondotha and Copesville- Ezinkatheni. Ezinkatheni was also a victim of land invasions being displaced thrice. Other sites in planning are at Balfour, Ulundi, Pietermaritzburg, Waterval Boven, Mkuze, Cape town, Matatiele, Mthata and Groblersdal Limpopo to name a few.

Leveraging of resources is critical for all projects with business partners; Transnet provides land and infrastructure and partners provide human resources, equipment, services and related support. The partners include the Departments and entities of Social Development, Correctional Services, Home Affairs, COGTA, NGOs, Municipalities, Tribal authorities, Community Police Forums the SAPS among others.

The Ermelo centre has a confirmed site and a temporary office used by social workers and municipality..

The Empangeni centre, including the railway police site, has been confirmed using an old Transnet building. Other buildings are being identified for centres nationally.

The centres also hosted some important gatherings; at Ireagh hosted a rail safety week and at Khuma, rail safety presentations. Career expos are planned.  In addition, the Thokoza centre hosted a workshop on child abuse and the prevention of domestic violence.

Food gardens have been established and maintained at Springs, Ireagh and Khuma. Vegetables grown in the gardens benefitted more than two thousand community members.

Transnet does not decide on its own what facilities and services communities require. Local organising committees, established from among residents meet with key stakeholders, identify the community’s needs and suitable sites. These stakeholders include national and municipal representatives.